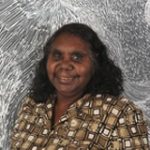 Anna Petyarre was born around 1965 is the daughter of the late Glory Ngarla and niece to the late Emily Kame Kngwarreye. An emerging artist in the Utopia region, she began painting in the early 1980s. She is a mother and grandmother.

A versatile and creative artist Anna has changed her painting style radically several times over the last decade. Her work is becoming more collectible as she develops her reputation as one of Utopia’s rising talents.
She resides at Mulga Bore Utopia Australian Northern Territory approximately 220 km from Alice Springs. This is the place where she currently paints. Anna has painted on and off since early childhood. Anna Petyarre (Pitjara) commenced full-time painting in the early 1980s when the medium of canvas and acrylic paints was introduced to the community of Utopia. Under the careful guidance of Gloria Petyarre, Anna began to paint her own work. Over the last few years, Anna has been learning further skills from the Women painters in Utopia.

Anna primarily paints Yam Seed Dreaming, her works are colourful and intricate expressions of the songs and stories associated with her plant totem, the Bush Yam, and its seeds. The Bush Yam has been a staple food and water source for the Anmatyerre people for countless years, and the seeds that form and scatter from the plant are ground up to make flour for damper. During ceremony, it is Anna’s duty to pay homage to the yam seeds and give thanks for their abundance and regenerative qualities. By painting to the tempo of a ceremonial song, Anna expresses her connection to her plant totem in a permanent medium.