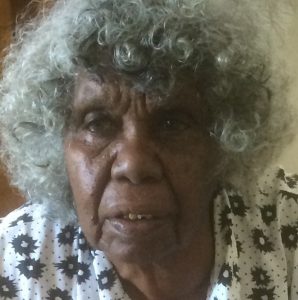 Medium: Acrylic on Canvas and Linen, Batik on Silk

Violet Petyarre was born on the old Utopia Station at Atnagkere Soakage, c.1938. on the western boundary of Utopia Station, 250 kilometers, north-east of Alice Springs in the Northern Territory of Australia.

She is an Anmatyerre speaker and is a significant Elder of one of the most important movements which has emerged from desert painting, the Utopia Women.

Violet Petyarre is sister to artists Kathleen, Gloria, Ada Bird, Nancy, Myrtle and Jean Petyarre. Like the majority of her sisters, she was involved in the batik movement that established the women artists of Utopia.

Her work is represented in the Holmes á Court collection. Gloria often refers to Violet for intimate details of the many plants involved in their ceremonial life. Originally working with batik in 1977, Violet painted the Mountain Devil Lizard Dreaming which is from her father’s country on silk textiles.

In 1988 she commenced painting on canvas, which she produced alongside her sister Kathleen Petyarre and her Aunt, the late Emily Kame Kngwarreye.
Her work was immediately noticed and acquired by major private and corporate collections worldwide. Violet currently lives at Mosquito Bore Outstation in the Utopia region.

Violet (with her brothers and sisters) has custodial rights of the Arnkerrth Dreaming (Mountain Devil Lizard), which together with its associated narrative, is referenced in many works of Violet Petyarre
With other Utopia women, Violet Petyarre’s first works-on-canvas evolved through a special local project entitled ‘Utopia Women’s Paintings – A Summer Project 1988-1989’ (The Holmes a’ Court Collection). This project engendered a new direction of artistic output, launching Utopia as a major centre for Indigenous art and placing it firmly within the context of the Australian contemporary art scene.

Violet Petyarre has established herself as a significant figure of the Utopian and Australian contemporary art movements.
Violet took part in the Summer project in 1988/89 at the S.H. Ervin Gallery in Sydney, a world tour of Ireland, Scotland, the USA (Harvard University, the University of Minnesota, Oregon, St. Louis, Missouri) and The Art Gallery of NSW in 1990, with the Holmes a Court Collection.

Violet Petyarre’s role as a foundation member of the Utopia arts community together with her artistic individualism has firmly endorsed her position as an important contributor to Australia’s art history.